You are here: Startseite, Culture & Tourism, Portrait of the City, Sights 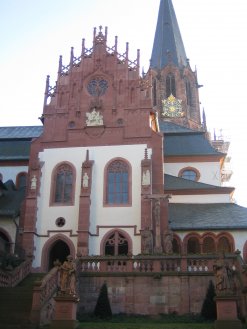 Otto of Swabia and Bavaria had this church built in the 10th century at a spot where a Carolingian rectangular building was situated before. The core was built during the Romanesque until the early Gothic period (12th century). The eldest part of the actual church building is the nave with its Romanesque pier arcades (12th century). The cloister, the transept, the eastern choir and the western and north-western portal were built in the first half of the 13th century. The bell tower and its octagonal superstructure were completed in the 15th and 16th century. The church houses important art treasures and fittings. The "Lamentation of Christ" shall be mentioned in particular, as the last work of Matthias Grünewald, a famous German painter of the Renaissance, in addition the wooden crucifix of a size larger than life (10th century) and the cloister of the late Romanesque period. The collegiate museum is located inside of the historic rooms of the collegiate chapter house, providing a comprehensive collection of archaeological finds from the prehistoric and early historic period, as well as a collection of old works of religious art from Aschaffenburg and from the Untermain region.